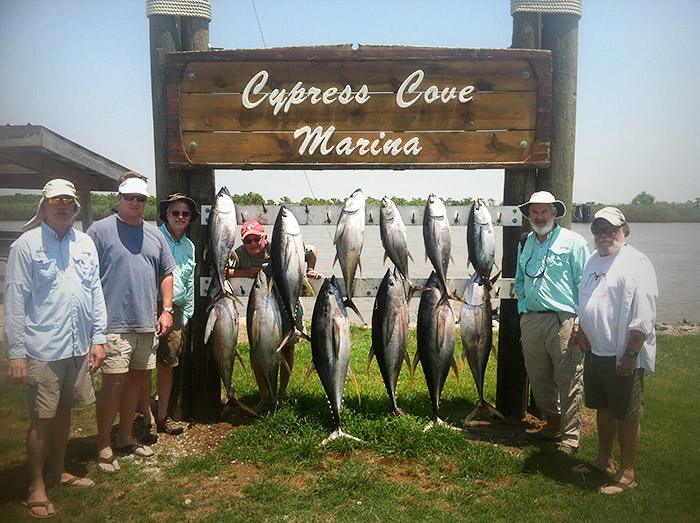 This small tuna has the typical tuna body shape, but smaller in size, some say it looks like a football. Blackfin tuna may lack size, but they do like to bite!

This tuna is short-lived, and abundant. On some days, when it seems as if aliens have arrived, and secretly swiped away all our fish, the blackfin remain.

It is a fast-growing species, though commonly only weighs about 15 pounds.  We sometimes encounter large schools where the average weight is 25 – 30 pounds, and in rare cases, we’ll see blackfin tuna that exceed 40 pounds. No worries, though, what these fish lack in size, they make up for in numbers and their willingness to bite.

At MGFC, we don’t ever get a call asking us to book a blackfin tuna trip exclusively. But, they’re found all over the Gulf, and swim in closer and greener water than all other tuna. We’ll catch these while stopping off to catch live bait for other species, and while fishing behind shrimp boats.

These open ocean predators are strong, fast and capable of long, reel spinning runs. The species travels in schools, like Mahi-Mahi, and will often feed on the surface, chomping down on everything from live bait to artificial lures.

The great thing about catching tuna is they travel at high speeds and in large schools. What’s that mean to you? It means tuna fishing is challenging and exciting, and it means we’ll get you plenty of action.

Anglers spend a good amount of time researching the world’s best yellowfin tuna fishing destinations. We’ve had fishermen tell us they’ve been to Panama, Mexico, The Bahamas, and Southern California, and that nothing compares to a tuna trip right here in our own backyard. In a word, we think it’s  “Epic” in Venice, LA. Give us a call to book your tuna trip now.

Book a tuna trip with MGFC now! Whether you’re an experienced tuna angler, or a first timer, give us a call. Let’s go tuna fishing with MGFC!