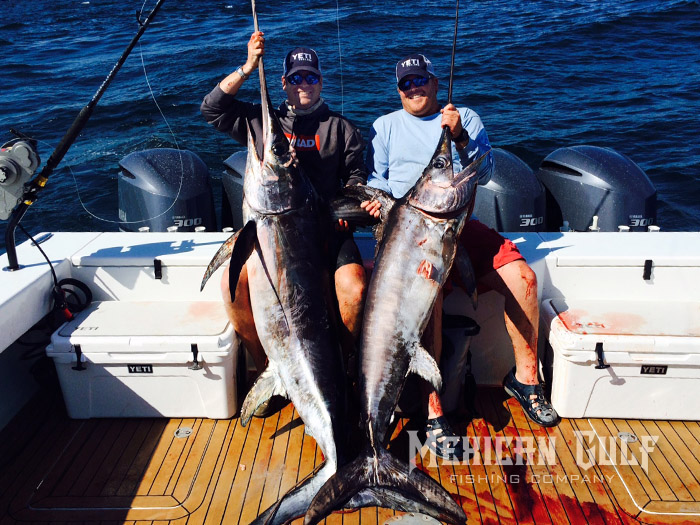 Swordfish are large, powerful fish with a high, angular dorsal fin and sharply forked tails. Their most distinguishing feature, however, is the enormous bill or “sword” — hence the name.

Much longer and wider than the bills of Marlins and Sailfish, swordfish are prized as much for those special bills, as for their tasty meat and good fighting capability.

Color is mostly dark brown on the tops, though sometimes this tends to look purple. Undersides are whitish, silver. Another interesting body feature of the swordfish is it’s large eyes. Fascinating to many, as evidence by one that washed ashore Florida in 2012.

Making a day drop on the way in from the tuna grounds can be the perfect way to finish your trip of a lifetime!

The best months for Swordfish are in the Spring and Summer, and … daytime sword fishing is a fun treat for the anglers that just have to see and experience it all.

At MGFC we fish for Swordfish on day trips, and we can combine deep drops in the afternoon with a morning  of tuna fishing. Swords — as a species — are making a strong comeback in the Northern Gulf of Mexico.

No matter what, it’s worth the trip. Swordfish meat is just about the tastiest you’ll come across in the sea. And, all but the smallest fish, give you enough to feed a family or to throw an entertaining party with your catch once back home.