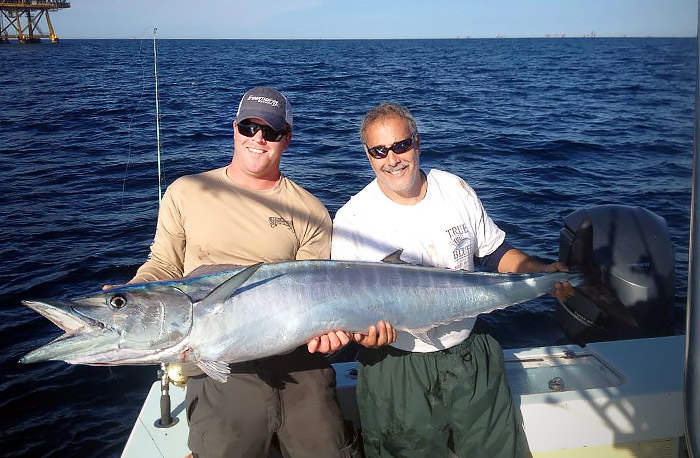 Wahoo Fishing in the Gulf of Mexico

Long, slender bodies marked with zebralike stripes of white and deep blue — sometimes black. Wahoo have elongated mouths and razor-sharp teeth. These creatures are bad-ass, almost prehistoric looking fish, that swim fast, and fight fiercely — making for a fun day on the water in the Gulf of Mexico.

See what catching Wahoo is all about!

These fast paced fish are a helluva a challenge. Their strength, fast runs and fierce nature make them among the most prized of all big game fish in Louisiana, and they make for “unreal” table fare.

Crazy good table fare. Most consider it better than tuna sashimi. But, … cook wahoo at high temps, and quickly to seal in the flavor. It also is a good smoking fish

Wahoo strike surface baits in spectacular fashion, but seldom jump after being hooked. Fights are often marked by a series of sizzling runs, usually at or near the surface. Wahoo are one of the fastest of all gamefish.

At MGFC we use a variety of tackle and techniques to catch Wahoo. Many are hooked on heavy tackle. Best choices are light to medium ocean trolling outfits with lines up to 30-pound; 50-pound isn’t too heavy for good sport with the larger fish. A few have been caught by ocean casting with spinning and bait casting tackle — even fly tackle on rare occasions. Surface trolling is sometimes effective, but deep trolling is much more likely to produce a Wahoo.

Book a trip with MGFC now! Whether you’re an experienced offshore angler, or a first timer, give us a call. Let’s go wahoo fishing!