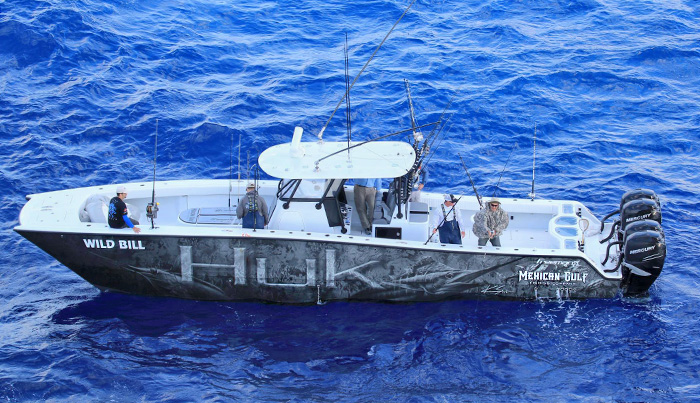 Captain Billy Wells says: Fishing. It’s what I know, who I am — I’ve never made a steady penny any other way. This is what I believe I’m here on this earth to do. The calm seas and beautiful sunsets on summer afternoons, the screaming drag of the first run of a large fish, the camaraderie of a celebratory cold one after a successful day of fishing — does it get any better than this?

Born and raised in New Orleans, I’ve been fishing since I was big enough to hold a pole, and I began working for hire when I was seventeen. Thirteen years ago, I became a captain, and I’ve never looked back.

My satisfaction comes from seeing the excitement, and smiles and exhaustion that come when clients defeat a big fish. Nothing compares to sinking the gaff into a large yellowfin tuna and seeing the beautiful contrast of streaming blood in cobalt blue water. Nothing beats catching large tuna, seeing the look on people’s faces as they wonder if the fish will ever stop and hearing, “I can’t believe a fish can pull that hard.”

My philosophy is to run and run, to cover water. The fish are out there, and it’s my job to find them.

Personally, I live by three beliefs:

As far as formal education, I started at Louisiana State University, studying wildlife and fisheries before transferring to the University of New Orleans, intending to pursue a naval architecture degree. Eventually, I switched to mechanical engineering, and eventually, I graduated .

As far as my fishing career, in my teens I did some guiding inshore for trout and redfish and became a deckhand offshore on a 36-foot Topaz. In 1998,  I bought my first boat, a 25-foot Mako, and today, I have a 42-foot custom Freeman Catamaran, “Wild Bill.”

One helluva fishing machine, this boat was built for me, to my specs. We have repowered it with Mercury Motors and outfitted it with  twin Simrad NSE12, a full complement of Furuno electronics, Sirius weather to keep us one step ahead of Mother Nature, and Sirius satellite radio for clients’ listening pleasure are just a few of its amazing features.

My wife Stephanie and I have three children, Taylor, Grace, and Billy. One of my goals for this year is to fish with my kids more often and to help them start chasing some junior angler records.

As part of my commitment to the community, I donate a lot of trips to my kids’ school and to people in need. We once raised more than $27,000 to help pay for leukemia treatments for a two-year-old girl, who is now in remission. When I’m not fishing, I enjoy hunting for elk, deer, and ducks, and I also like to cook. I’m a member of the Louisiana Charter Boat Association.

In 2000, I won the Puerto Adventures sailfish tournament in Mexico. While fishing on the 50-foot “Viking Gringo,” I caught four sailfish, one white marlin, and one blue marlin. In 2005, at the Isle of Capri marlin tournament out of Biloxi, Mississippi, I placed fourth and had the pleasure of weighing a 403-pound blue marlin.

My favorite tale: The day before Thanksgiving in 1999, I took my two brothers fishing. Within five minutes of baits out, the flat line got crushed. Three and a half hours later, I sunk the gaff into the largest yellowfin tuna I’ve ever had the pleasure of sticking. Unfortunately, it wouldn’t fit into the fish box I had at the time. I had to cut off its head and tail and gut it so that I could ice it properly. Back at the dock, it weighed in at 175 pounds, which put it around 220, if it had been whole. To this day, it’s the largest tuna I’ve ever landed, and the only thing I’ve ever seen that could shut my brothers up!

Would you like to fish on the Gulf of Mexico? Do you want to add a 175 lb yellowfin tuna to your best memories? Then book a trip with Captain Billy Wells. Fish now with one of the founding captains at The MGFC.

Trips are $2,000 per day + fuel. Fuel averages 275-300 gallons per trip. Note: Trips are booked online. A $300 deposits is charged at the time of booking, all deposits must be made by credit card. A 4% processing fee is added to credit card orders. Balances on each trip may be paid by cash, check, or credit card (made out to your captain).