The Mexican Gulf Fishing Co. (MGFC) is proud to fish with Shimano rods & reels. Shown here, the Shimano Talica 50II. One question: is the guy in yellow a Photo Bomb or is he amazed at the the Talic 50II/Terez’s power 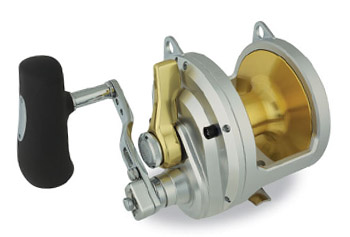 Shimano’s new Talica TAC-50II, is a two-speed reel that provides anglers with a compact, high-speed castable lever-drag reel that can hold enough line to battle just about anything that swims. In the photo above, we had a monster wahoo on the end of the line. But, we just as frequently use Shimano’s TAC-50IIs on big tuna swimming round our neighborhood in the Gulf of Mexico off Venice, Louisiana.

Shimano sponsors MGFC. We’re proud to fish with their products; they’re a big part of our success.

A charter trip is only as successful as the charter captain, but having the best gear helps.

Shimano makes the best rods & reels. Plain and simple, it’s why we fish with them. That means when you fish with MGFC, you’re fishing with the latest and greatest gear in the sport fishing industry.

Book a trip with MGFC to see what the latest in Shimano technology feels like in real world use.

Features of the Shimano Talica 50II