Jordan Ellis was born in Mississippi, but we don’t hold that against him.

He’s been fishing Louisiana waters since childhood, and fishing from Venice for many years. Initially, as Capt. Kevin Beach’s 1st Mate on the Pale Horse, and now as a fully licensed charter captain running the mammoth and infamous, ShockWave — a 40-ft Freeman Boatworks monster that has to be ridden on to fully appreciate.

Ellis comes from a large fishing family. His dad and mom were both big sports anglers, and his brother is a licensed captain aboard a private vessel. He moved to Venice after college (Tulane), worked for three years as a mate, then earned his license, and now fishes full-time as a captain with MGFC. 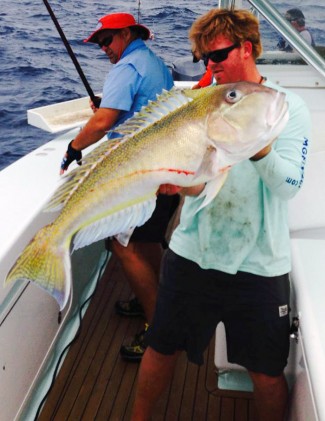 “Few people expect you to graduate from Tulane and go be a charter captain,” says Ellis. “But, this really is all I ever wanted to do. I’m glad to have learned the most successful people in life are the ones who find a way to make business out of something they’re passionate about.”

“I’m passionate about fishing, and helping people have a great time while they’re on the water. Catching fish is what I’m good at, and I’m just thankful that  I get to help people have successful days out in the sun and the fun on the water.”

Ask Jordan about fishing from Venice, and he says, “there is no other fishing like it. Period. That’s all there is. Where else can you catch everything from a bass to a blue marlin, all in the same day?” Though he’s fished throughout he Gulf Coast, and in the Caribbean, Jordan says he thinks fishing from Venice affords sport anglers the very best in North America.

Anglers can expect a promise from Jordan when booking him for a charter trip, “this means as much to me as it does to you. That’s my promise. I want you to see what a great time we can have by being open to any opportunity. Everyday you can see something different, and I’m gonna make sure you don’t miss a thing.”

Jordan takes charters on the ShockWave for MGFC. He has some open dates in July and August, but they’re filling up fast.

Thanks for stopping by MGFishing.com