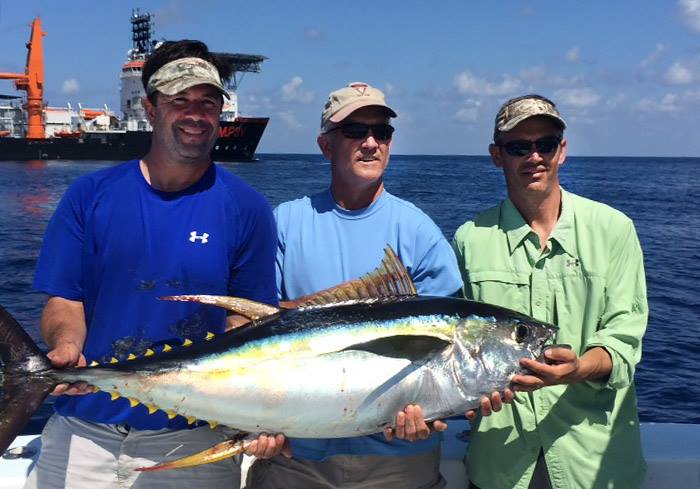 Captains Kevin Beach, Billy Wells, Jordan Ellis and Travis Mayeux have been booked solid through the month of June, and the fishing has been fantastic.

When asked what they’ve been catching, Wells says, “tuna, tuna, tuna. We’ve been putting our customers on lots and lots of tuna. We had a phenomenal week at the end of June, and really hit July running with big mahi mahi, a few marlin, and lots of tuna.”

As Jordan Ellis says, “we’ve been having a lot of two cart days back at the dock.”

Snapper season, though short, was good. “The summer has just started, and it’s only going to get better,” says Beach. 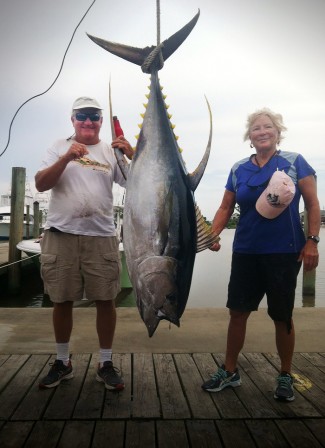 Look for more bait to arrive, Mahi-Mahi to pick up, and the tuna fishing to remain strong.

Not bad for a day’s work.

Ellis helped his customers land a 162 lb. yellowfin on the ShockWave, and Mayeux had a charter pull in a 148 lb. fish. Beach has put customers on tuna, and landed two marlin in just the past week.

Says Beach, “as the herring become more plentiful, you can book it: the tuna are going to get bigger and be more abundant.”

We still have a few spots open in July and August, but book fast, those dates are almost gone.

We’re taking booking requests for the Fall already. Use our booking form to tell us what time and what type of trip you want to take. Remember, we’ve got four boats to serve you at MGFC: the Pale Horse, the Wild Bill, the ShockWave and the Sweat Shop.