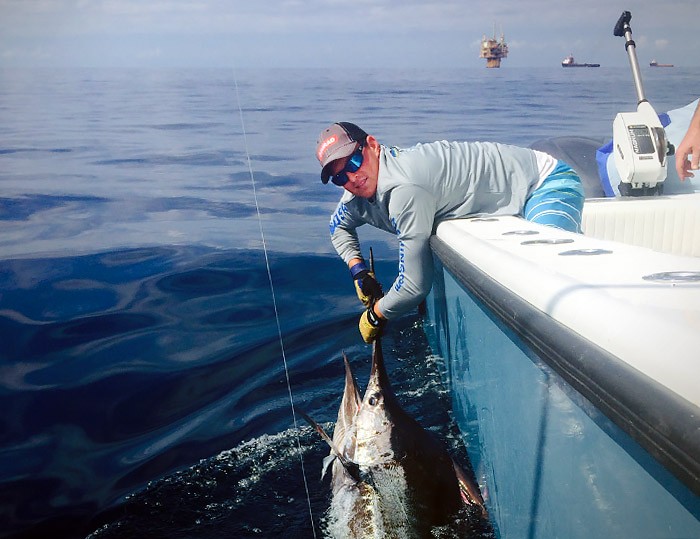 “Problem was,” says Byrd. “Things were going good, and the fish were right where we expected them to be, they just stopped cooperating. Like turning the switch off. It happens sometimes, we know.” 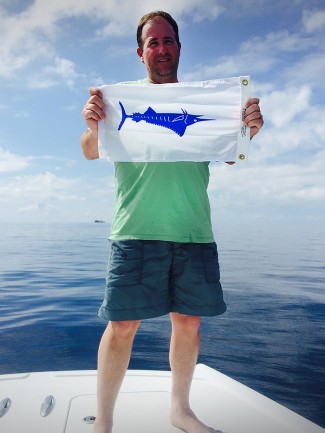 The mark of a good captain is adaptability. And that’s just what Byrd and Wells did when the yellowfin tuna bite turned off, and the Blue Marlin bite popped on.

“Perfect timing,” says Wells. “We’re out on the open water, having a nice day. Weather is perfect, fish are everywhere, we’ve already got a good group of yellowfin tuna in the boat, when for some reason the bite goes stale. All of a sudden, we get a monster hit! A phenomenal bite.”

Wells says this blue marlin struck less than eight feet from the boat, bit down big time on a hard tail, and just ran.

“We had him on the line, right away, for sure.” says Byrd. “Our customers all had giant smiles on their faces, but honestly, it took a few seconds for all of us to realize what just happened. We all saw the bite, and we knew what it was, but you know the energy and adrenaline gets into you, and it’s not before the customer in on the pole and fighting the fish that it begins to sink in: game on.”

The game was on all right, and the charter group, booked by Brandon Hales, have some great fish stories to tell. Little known fact: fish stories are always better when they involve marlin, FYI.

Hale’s friend Michael fought the blue for approx. 1.5 hours before getting it back on side the boat.

Returning to dock, Michael was all grins. Hales was pleased with himself for booking online with MGFC, and the f/v Wild Bill proudly flew a blue marlin flag for all to see as they rolled into Venice Marina. Content with a fun day at sea.