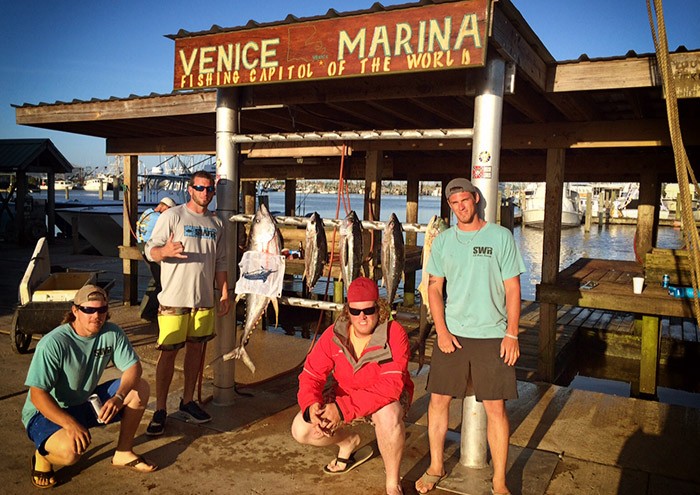 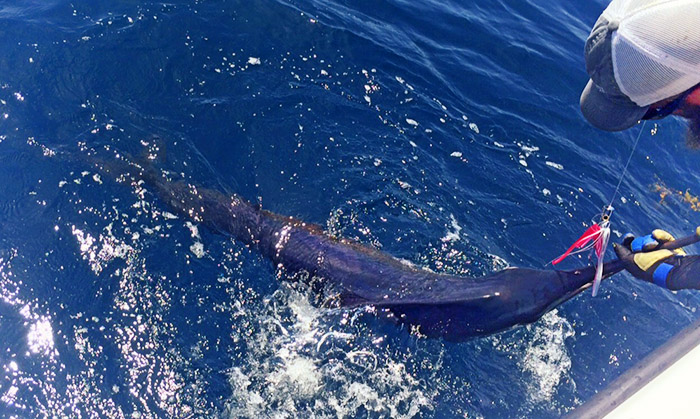 In fact, at one point, it was so close Travis reached down to see if he could bring the fish up, and that’s when it tore off a bunch of drag and ran out to sea. They fought the marlin for about an hour, but she wasn’t going anywhere. Barrett did a nice job on the rod, which Mayeux set with 300# Seaguar fluoro.

This marlin, now grinning along side the vessel and looking up at Barrett and his captain, was about 300 pounds. What a memory and an exhilarating battle.

With the memory still fresh in their minds, Travis spotted a monster blue marlin on a nice grass line in beautiful water.

“This fish had to be 600 pounds,” said Travis. “We were looking for bait fish, and she approached a couple of times. I couldn’t get her to take a dead bonito, and we took a bit long to reel in a chicken dolphin, but if we had one more live bait that would’a been the ticket on her, too.”

Not to worry. Uncooperative big blue. They went on to troll for more dolphin, and had a great time talking about the one they already brought to the boat that day. 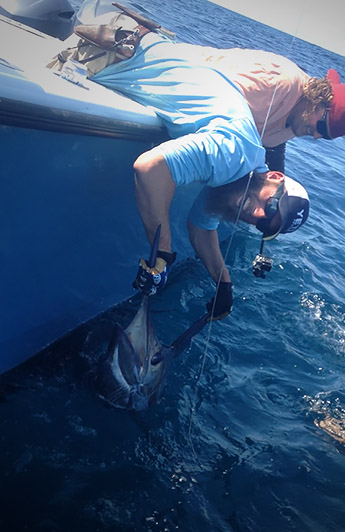 vis’s two-fer came on his very next trip. Leaving Venice Marina on Tuesday morning, with Josh Ruffin and friends, Mayeux actually put them on two marlin in quick succession. The first one got away as that line wasn’t held tight, but they landed that second fish. Travis says it was quite the show.

“I reeled the pink and white islander up, and there were bill marks 3 feet up the leader. So, I put another ballyhoo on it and sent it back out. We just had a real nice marlin on the line for a short battle, and I was certain we’d be able to coax another fish to strike again.”

He was right. Almost as soon as he sent the line back out, a marlin snapped down on it and came up jumping. She thrashed and gashed. The fish was head shaking and trying to lose that hook, but it wasn’t going anywhere. The hook was set, the line was tight, and the combination of Mustad + Shimano + Seaguar Fluorocarbon did it’s thing.

Everyone on the Sweat Shop enjoyed the battle, proving that sometimes marlin fishing is equal parts adrenaline pumping activity and fan watching spectator sport (for those not on the rod).

It was amazing having such an angry fish so close to the boat.

Blue marlin are some of the largest fish in the Gulf. Females are generally larger than males. Some can reach up 14 feet and almost 2,000 pounds. More commonly, blue marlin come in at 9-10 feet, and average 250-300 pounds.

Capt. Mayeux is an experienced charter captain working for MGFC. He puts many customers on blue marlin in the friendly warm waters fishing out of Venice Marina on his 33-ft Freeman Boatworks catamaran, called the f/v Sweat Shop.

Is blue marlin on your bucket list? Book a trip with Travis Mayeux for blue marlin today.